I was just doing some work and noticed something in my news feed. I am sure I need to have a chat with the algorithm because it shows me quite a bit of women who make splashes with sexy social media posts. 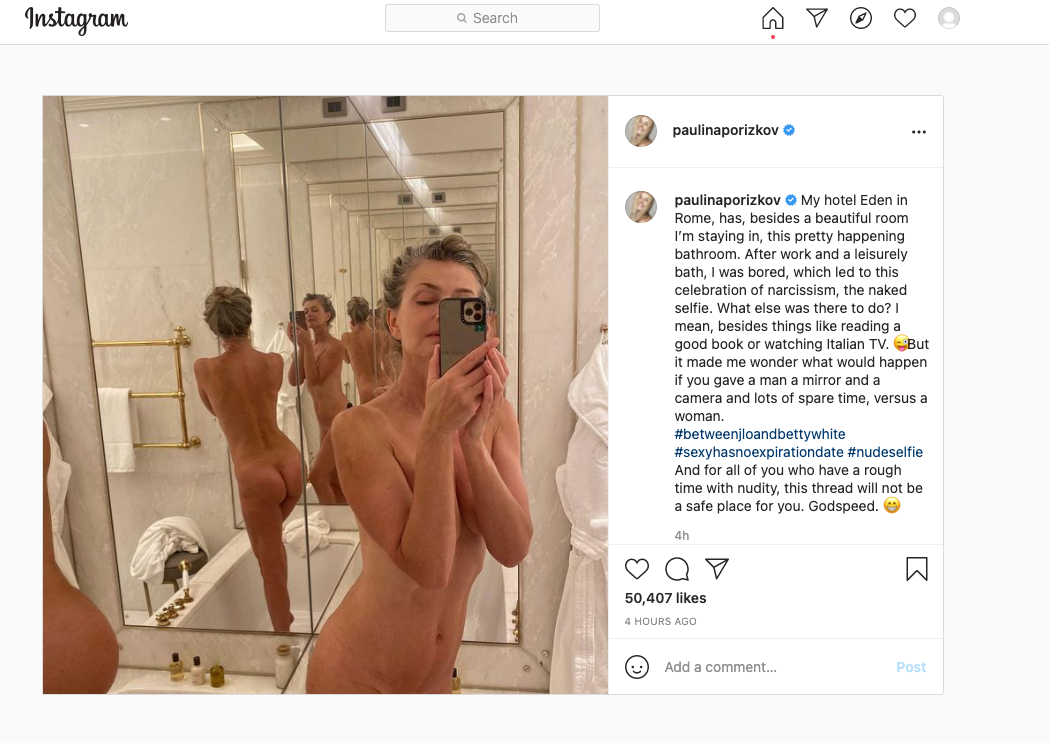 I was just doing some work and noticed something in my news feed. I am sure I need to have a chat with the algorithm because it shows me quite a bit of women who make splashes with sexy social media posts. Or maybe I need to stop taking the bait. lol!

But there was this post from Paulina Porzikova. For those that don’t know she was a supermodel in the 80’s. I have probably have perused a few issues of her in Sports Illustrated. She is 56 now and has been taking some sexy pictures lately.

So yesterday she kind of “broke the internet” with one. I have no problem with her being nude or her promoting feminism. But here is what she wrote… “I was bored, which led to this celebration of narcissism, the naked selfie.”

And here in lies the problem. Not many people know the true extent of Narcissism. I know this is going to sound singularly viewed, because of my experience, but I now believe that it’s nearly impossible to really know about narcissism until you have been a victim or have studied victims.

People with other disorders likely “suffer” from their own behaviors. Narcissists do not. The mechanism of NPD is always there to protect them. To keep them from feeling like a bad person or damage their ego or hold them accountable for anything they have done wrong. They do feel shame but they don’t correct it. They rage.

They are only accountable if it suits them or if it will make them look better. And they will only apologize to gain an ounce of credibility back. Once they do it’s back to the gaslight. Trust me they are never wrong in their own eyes. They are never hurt like you and I. They get wounded and that turns into rage to be thrust upon someone else.

Look no further than Donald Trump. I don’t think anyone would doubt he is a narcissist. But they don’t know to what extent that affects his behavior and how much of a priority his narcissism is. For him it is all encompassing. He is a lesser Narcissist in that he doesn’t know what he is. And he wears it like a suit. Most of the higher narcissists are far more subtle. But there he was… lost an election. And for the good of the country he should have conceded and participated in a peaceful transition of power.

But his ego could not allow that to happen. Let me say that again his ego could not allow that to happen. He believed any fantasy story someone would tell him about voter fraud. Including, wait for it, from the My Pillow guy. That was who he was getting a lot of information from. Now if you never experienced it and I removed you from this reality and told you what happened you would laugh your ass off. But the truth is, it’s not funny.

His Narcissism led to violence, distrust, and a faction of the country ready to run the rest of us of the rails just to appease him. They don’t care about reality, facts or anything else. But you see these people are victims of narcissistic abuse. They have been gaslighted to the point that they think they are special and entitled and that Donald J. Trump will make sure they get what they are entitled to. And those people will live in the world the narcissist creates for themselves until they realize they are no longer living in the reality the rest of us are. I know I let Hailey get away with a ton of shit because she was “for me”.

This is the most obvious example I can provide for people to understand just the minimal extent of what chaos narcissism can cause. And look at the damage he has done with it. And these aren’t people in personal relationships. Some of the people who stormed the Capitol are claiming they were victims of fraud. Led to believing a lie told by him and perpetrated by a friendly media.

Now let’s swing our focus back to Ms. Porizkova. This is not the only time she has used this term. Here are some other quotes-

I read some of the comments from her post that cheered her on. A bunch said she was being authentic and I have heard this about Trump as well. People admire them for being unapologetically themselves. But I can assure you there is no authenticity in a Narcissist. They want you to see what they want you to, not who they are. Baring a body is not the same as baring your soul. And narcissist have no soul.

I am not sure she even understands what narcissism is. Look at that last quote. Or even the one she put out yesterday. We all have narcissistic traits. We like admiration, we like being thought of as special. Some of us would even love to be entitled to certain things. VIP treatment if you will. And maybe this is what she was referring to.

But here is the difference with indulging in the narcissistic trait vs. being a narcissist. Is that most of us have empathy and that empathy keeps us from putting those narcissistic traits above hurting others. We don’t leave a trail of victims to support our narcissistic tendencies. We recognize truth, fairness, and ethics. Narcissists do not. The rules apply to the rest of us but not to them.

So our narcissistic traits allow us to relate to a narcissist. So when they exhibit one or have a small sample size it might been seen as natural behavior. And some might even wish they had the “courage” to behave that way. But it isn’t courage at all and this connection most of us make is what helps them pile up the victims. It’s “normal” or even admired behavior so it’s on the victim to carry the burden of that abuse. And it makes it impossible for the victim to call out the abuse. How is “normal” or admired behavior abuse?

I have read Paulina may have been a victim of narcissistic abuse from her late ex husband. However that should give her plenty of empathy or enough knowledge to recognize that narcissism should never ever be celebrated. It minimizes the abuse everyone has suffered at the hands of a narcissist. If she isn’t a narcissist then use a new word in a celebration of feminism or life or vanity. Anything else will do.

I think what was disappointing is how few people commented or recognized her use of the term. I wish the mental health experts would get on top of this. Figure out a clever way to unmask this disorder to keep from perpetuating the behaviors and help elevate victims instead of protecting the potential “Narcissistic Patient”.

Because that potential “patient” is likely creating 10 fold more in victims. They also don’t typically seek therapy. And if they do, they don’t walk in saying they are a Narcissist. I hope for the victims to come that this changes. That their recovery is made easier but a better understanding of the terrible impact of narcissistic abuse.

4 thoughts on “Broken – Something Irked Me Yesterday”